Cinderhazel: The Cinderella of Halloween by Deborah Nourse Lattimore is a witchy version of Cinderella, very appropriate for Halloween. (Obviously.) Although displaced from more typical stepsisters into a family of witches, Cinderhazel also gets criticized for being too dirty. However, unlike her Ella counterpart, Cinderhazel loves dirt and being messy. She's a fan of dust and grime and not too keen on brooms.

Still, she has to face her share of snark and unkindness. Even so, as these things are wont to unfold, she manages to get herself to the ball in spite of the best efforts of her stepsisters. Only to discover that the prince hasn't made an appearance all night.
As it turns out, Cinderhazel and the prince have an uncommon interest--which leads them to shoo the other witches out of the party and get to know each other.

This is a cute Dustily Ever After story with some wonderful artwork. Definitely recommended if you want a picturebook version of Cinderella which is unique for more than just the artwork.
Posted by Unknown at 3:00 PM 1 comment:

Although this looks like it should be a version of Hansel and Gretel, it's actually a retelling of The Snow Queen.  (Although it does have some Hansel and Gretel-esque moments.)  In fact, the story borrows from several other traditional folktales, but mostly is about Hazel battling through to free her friend, both from capture and from the emotional danger he is in.

I loved this one.  Considering that the story starts in a modern setting and manages to find it's way into the Dark Forest of fairy tale lore (and back again), I found it all to be believable by the time Ursu worked her magic.

In addition to the story, there are several inset art pieces, and they are just lovely:

Although the bits and pieces of stories that cross Hazel's path aren't as predominant as in some mashups, they were essential to the mood and atmosphere of the book.  These aren't princess stories or happily ever after stories, and they lend the sense of danger to her quest.  There is also the danger that she herself will lose her way, and simply take up residence in the imaginative forest without bothering to save her friend or return to her real life.  (And I really appreciate that the symbolism of this is purely symbolic, not implied to be the "true" version of events.  She's not dreaming or pretending!)

This is a quick read for adults and perhaps a somewhat challenging book for middle grade students, who won't necessarily recognize the folklore than Ursu is drawing on.  Even so it's a very satisfying challenge/success story, and may be a good introduction to the width and depth of folklore.

Dewitched: The Untold Story of the Evil Queen by E. L. Sarnoff 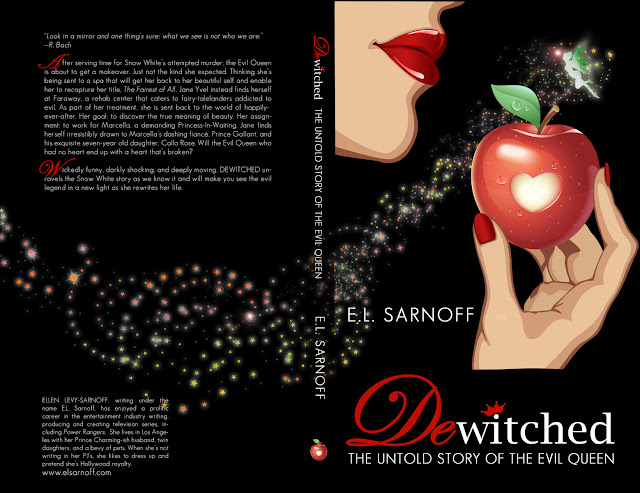 Here's a fun mashup of fairy tales: E. L. Sarnoff's Dewitched.  The premise of this one is a lot of fun -- after the evil queen's plans to kill Snow White are thwarted, she's entered into a rehab program, by none other than the Huntsman she had trusted to help her with her wicked plan.  With a steady barrage of familiar fairy tale characters, and lively writing, this one is a page turner.

The only real problem I had with this was the constant use of sexuality and ugliness equating to wickedness among the female characters.  This was all from the viewpoint of the rehabilitated queen, whose thoughts and attitudes don't change so much as she learns to progress from her initial impulses of anger and jealousy.  So I suppose it's a matter of the character, but I felt uncomfortable with the constant uses of the words "skank" and "whore" as derogatory terms.  There is also a whole can of worms about body image here and I didn't feel like the writing handled that in a fully responsible way -- in spite of the premise that the queen must overcome her inability to see inner beauty, there is a consistent use through the book of ugliness or ugly terminology to depict evilness.  So if that is a hot button for you, I would avoid this one.

However, it is a fun romp with a lot of clever writing in terms of the use of fairy tales and sly puns about them.  Some of the throw-away mentions of other tales startled laughter out of me and there are good chuckles throughout the book, both in the fairy tale references and the characters themselves.

It's a light and funny read, with a cute premise and a lot of great cameos.  The book didn't go quite where I was hoping it would, but with some surprising twists near the end it was enough to keep me guessing.  It's only available as an ebook now, and for the low price it's a fun afternoon read.

The Scorpio Races by Maggie Steifvater 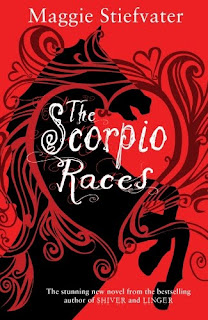 This isn't, in the strictest sense, a fairy tale, or retelling.  But it does hit strongly on the otherworldly, the underhill, or in this case, the undersea.

I admit I was turned off by the premise at first: on the tiny island of Thisby, at the beginning of every November, the islanders get together to race their water horses -- capaill uisce -- deadly creatures that would more often than not turn on their riders if given the chance.

What makes this story work is -- well, everything.  Stiefvater tackles the subject skillfully, building the lives of Puck Connolly and Sean Kendrick with care and detail, filling the world with tactile details, and creating a strangely bizarre but believable island.  Puck and Sean both have real stakes and their romance is savory and slow.  With ties to fairy magic (bells and iron to control the water horses) and a respect for Celtic-lore, the book is thoroughly enjoyable.

Also, the audio version is extremely well narrated, with a voice for Puck and a voice for Sean.  If you're an audiobook fan, I definitely recommend this one.

The Silver Bough by Lisa Tuttle 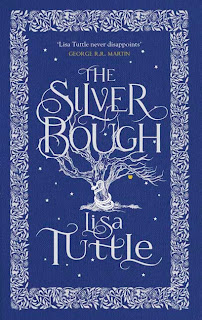 The Silver Bough was a recent treasure I found, thanks to the recommendation of a friend -- I'd never even heard of it.  Featuring an ancient and mysterious library, a strange blessing/curse tied up with apple trees, and a misty island that is half in and half out of this world: it was just my cup of tea.

Kathleen leaves her big-city library job to take over a position in tiny, declining Appleton, which was once famous for its apples (go figure) but no longer seems to have much of a crop or anything else to offer tourists.      Ashley visits her distant relatives and learns the story of how her grandmother left the town and rejected the blessing that kept Appleton prosperous.  And Nell has come to find peace and solace after the death of her husband, and her work toward restoring the apple orchard at the estate she purchased sets a chain of events in motion that will change the fate of the town.

The three women's lives weave in and out of each other's, and that of the town itself.  When Appleton gets cut off from the rest of the world after a mudslide, blocking the only access road, strange events start to affect all the locals and visitors....

This was a real gem, and definitely recommended if you want something that touches on the otherworldly and mythy.  It's not a straightforward folktale retelling but draws on many of the familiar elements and creates it's own fantastically atmospheric setting.  I think this one will appeal to fans of Charles de Lint or Juliet Marillier.